THE HISTORY OF THE CLEFS D'OR ITALY 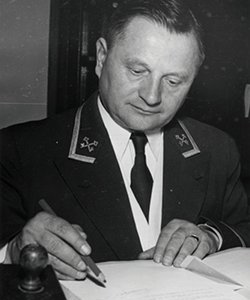 In 1929, the legendary Parisian Concierge Ferdinand Gillet created a network of international connections among Concierges, establishing the association Les Clefs d'Or. After some meetings in Paris with Ferdinand Gillet, President of the French section, and thanks to Giuseppe Franzetti, Chef Concierge of the Palace Hotel in Milan, the Italian Section of the Clefs d'Or was born in 1949. In 1952 the first National Congress was held in Pisa, during which Giuseppe Franzetti was elected President of the new Confederation of Regional Associations: the Italian Federation of Hotel Concierges "Le Chiavi d'Oro". The regional associations are: Lombardia/Triveneta, Campana, Toscana and Romana. The objectives of the Italian Federation of Hotel Concierges are based on cooperation between each individual concierge in order to strengthen working relationships, improve performance and provide the highest levels of customer service. 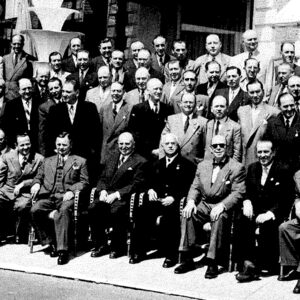 Also in 1952 Ferdinand Gillet formed the European Union of Grand Hotel Concierges in Cannes, which later became the International Union Les Clefs d'Or. Italy adheres to the new International Association and organizes in 1953 in Sanremo, the International Congress in which 11 nations take part. During the following National Congress held in Montecatini in 1955, the new President Alberto Pinto, the Vice President Giacinto Calvino, the Secretary Italo Spingardi and the Treasurer Erich Costantino were elected. In the 1958 Congress in Venice a new Vice President was elected Guido Parlanti of Montecatini Terme. During 1960 Pinto, due to health problems was replaced by Lorenzo Colasanti, like that of the Treasurer Costantino that will be covered by Egidio Canestrelli. In 1962 a new Congress was held in Genoa, in which Giacinto Calvino was appointed new President, Spartaco Giarola and Italo Spingardi Vice Presidents, Giuseppe Levi Treasurer and Sergio Giacon Secretary. The 1965 Congress was also held in Genoa. Giacinto Calvino was confirmed as President, Spingardi and Garbaccio as Vice Presidents, Tosin as Treasurer, Giacon and Lanfranconi as Secretaries. Naples was chosen as the location for the National Congress of 1968. The team was reconfirmed: Costantino took over as Vice President from Italo Spingardi who died in 1967. During this period F.I.P.A. played an important role within the International Association, which changed the name of the International to Unione Internazionale Portiers des Grand Hotels (U.I.P.G.H.) during the 1970 International Congress in St. Moritz, and appointed Giacinto Calvino as Honorary President. In 1971 Adolfo Lodigiani was elected President of the Roman Association and in 1977 he became President of F.I.P.A. replacing Oliviero Bellini, who had been elected twice in Milan (1971) and Montecatini (1974). Lodigiani remained F.I.P.A. President for eighteen years, until 1995. In 1978 in Vienna Spartaco Giarola became President of U.I.P.G.H. and was reconfirmed for a second term of office two years later. The XXVII International U.I.P.G.H. Congress, held in Rome from November 25 to 30, 1979, was attended by over a thousand people. A real success for Renzo Chiaranda, Egidio Canestrelli, Giulio Ercolini, Erich Costantino, Giancarlo Marchi, Martano Neri, Vincenzo Arciola and the other forty people who collaborated in the event. 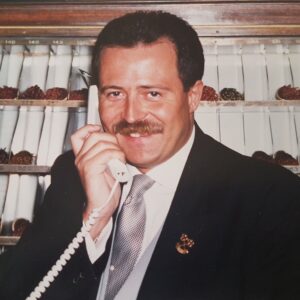 In 1995 in Turin George Church was elected President of F.I.P.A. and was reconfirmed as President in Venice. George Church He also chaired the organizing committee during the 44th International Congress, held once again in Rome from 6 to 11 January 1997. In Prague in 1999 George Church was elected 2nd International Vice President for the following two years. In recent years ten regional associations have become part of the Italian Federation of Hotel Concierges: Piedmont, Lombardy, Triveneto, Liguria, Tuscany, Emilia-Romagna, Campania, Appulo-Lucana and Trinacria. In November 2000 the new Statute was unanimously approved in Rome and the F.I.P.A. changed its name to Unione Italiana Portieri d'Albergo. Three regional associations, Piedmont, Emilia-Romagna and Appulo-Lucana, decided to leave the new organization in opposition to the new statutory rules, while the Ligurian association decided to dissolve due to insufficient members. During the year 2001 also the regional associations Romana and Trinacria dissociate themselves leaving the U.I.P.A.

The respect of the statutory norms and the request by the U.I.P.G.H. to constantly monitor the application of art. 4 of the International Statute, have substantially changed the structure of the U.I.P.A., which this time is called upon to strenuously defend its own identity. "A hotel porter is only someone who, as such, is qualified and works in a hotel, and wears the crossed golden keys on his jacket". This is what is stated in the statutory provision of the UIPA, the Italian Union of Hotel Concierges "Le Chiavi d'Oro-Les Clefs d'Or", while all other figures working behind a single desk will never be able to boast the title of "Concierge de Les Clefs d'Or". 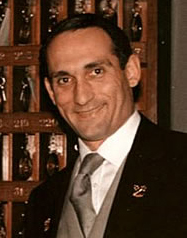 the year 2001 and during the Congress in Cernobbio, held in the prestigious venue of the Grand Hotel Villa d'Este, the Assembly of Delegates elects the new President, Mario Eroico.

This was a presidency in the name of continuity and one that was difficult to manage, given the continual attempts at readmission by those who had left, who continued to claim titles and names that no longer belonged to them. On this occasion, the new registered trademark was presented and the new Golden Keys, created by the Swiss jeweller Bucherer, were delivered to the members. In 2004, during the XXVII National Congress held in Abano Terme, Mario Eroico was reconfirmed at the helm of the U.I.P.A. until 2007. In this period valuable initiatives have been put in place such as the preparation of the website and the online Bulletin, edited by Federico Barbarossa. Other important projects aimed at the socio-cultural growth of the association were started and then completed in the following years. Since then, a more profitable participation in the Hotel Institutes begins and its fruits are not slow to arrive, recording a significant increase in the number of young students who approach the profession of Hotel Concierge.

After six years of presidency, Mario Eroico leaves the place to Federico BarbarossaBarbarossa, former UIPA Press Officer from 2004 to 2007, is elected by acclamation during the XXX Congress of Lecce. Bearer of a new school of thought, Barbarossa already engaged in the scholastic training of young Concierges, gives life to a real campaign of professional identity, intervening in events, symposiums and TV programs, giving interviews to the best and most specialized tourism magazines. He starts the process of reconstituting the Ligurian-Piedmontese Association and gives several regional associations the opportunity to have their own "Concierge information". He took care of the association's image in every detail in order to relaunch the profession of the Hotel Concierge, for too long disused by Hotel Managers and Companies. With him an important project began to take shape for the creation of its own professional training school. Thanks to this work, the Italian Golden Keys will be able to reap their benefits, guaranteeing a generational change for the irreplaceable professional figure of the Hotel Concierge. 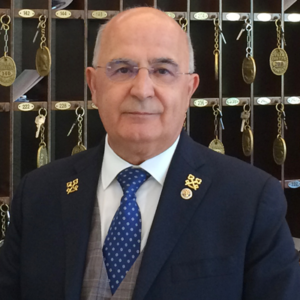 In 2009 Federico Barbarossa is appointed Area Director of the Mediterranean Area and Italy is entrusted with the Egyptian and Lebanese members with the task of supporting and instructing them in the creation of their own section. In 2010 In Assisi, Federico Barbarossa is confirmed as President. These are years of difficult management, due to the economic crisis that also involves the tourism sector and the consequent reorganization of personnel. However, valuable attempts are made to renew and adapt the statute and internal communication channels. 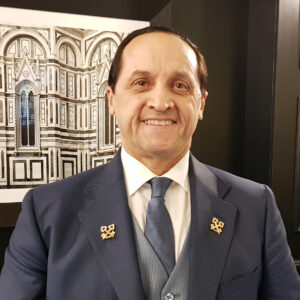 In 2013 Federico Barbarossa ends his national mandate and leaves the International office. Thanks to his work Egypt, which has now reached a sufficient number of members to obtain the recognition of the U.I.C.H., has started its own associative life carrying out the elections and spreading its initiatives to the media, while the Italian "Clefs d'Or" can continue to recognize themselves in the professional figure of the Hotel Concierge. During the Delegates Assembly, held in Florence in November 2013, Michael Paonessa was elected President of the Unione Italiana Portieri d'Albergo. During his presidency, the new UIPA Statute, to which all the Regional Associations conformed, was completed and drawn up. During his first mandate, President Paonessa wanted to add an important piece to his presidency, welcoming into the ranks of the UIPA the Trinacria Association, absent since the years of the split between FIPA/UIPA, celebrated during the Palermo Congress in 2015. He also substantially contributed to increase the relationships with the Institutions, the Hotel Schools involving a greater number of supporters of the Clefs d'Or Italia. Important partners who have accompanied the life of the association along its path of growth. Among the many and valuable initiatives there is to highlight the establishment of the Young Concierges Award, named after Giuseppe Franzetti during the Congress of Milan, which aims to select our young representative to the UICH AWARD held annually during the International Congress. During the Milan Congress in 2017, President Giorgio Chiesa wanted to sponsor the Award in order to guarantee the full development of the initiative and its continuity in the years to come. Immediately after the Milan Congress won by Teodora Moncea, the award turned into the "Fabio Carlesi Award" in the 2018 and 2019 editions, won by Mauro Contino and Michael Sorgato respectively. Reconfirmed for a second term in 2016, Paonessa continued his work of renewal and structuring, so as to consolidate both the economic and associative aspects as started by President Barbarossa in the two terms preceding his own. And precisely during the Trieste Congress of 2019, Federico Barbarossa was re-elected as National President for the third time. A presidency strongly supported by the associates who have placed in him the hope of the innovative completion, which, among other things, was started by him in 2007 and continued in the previous six years by Michele Paonessa. A mandate, as he himself declared, which will have one and only one objective: to prepare the future UIPA President and give life to a Training Project capable of guaranteeing growth and professional development to all members. In fact, immediately after his election he announced the creation of UIPACADEMY, putting in place an E-learning platform and several classroom appointments. Thanks to it, every associate will be able to actively participate from home in the training, optimizing his time and consequent interest. The Training Project, aimed at young Concierges and Full Members, will allow the former to pass the stage from Aspirant to Full Member and the latter, the professional certification and the consequent registration to the Professional Register of Italian Hotel Concierges.