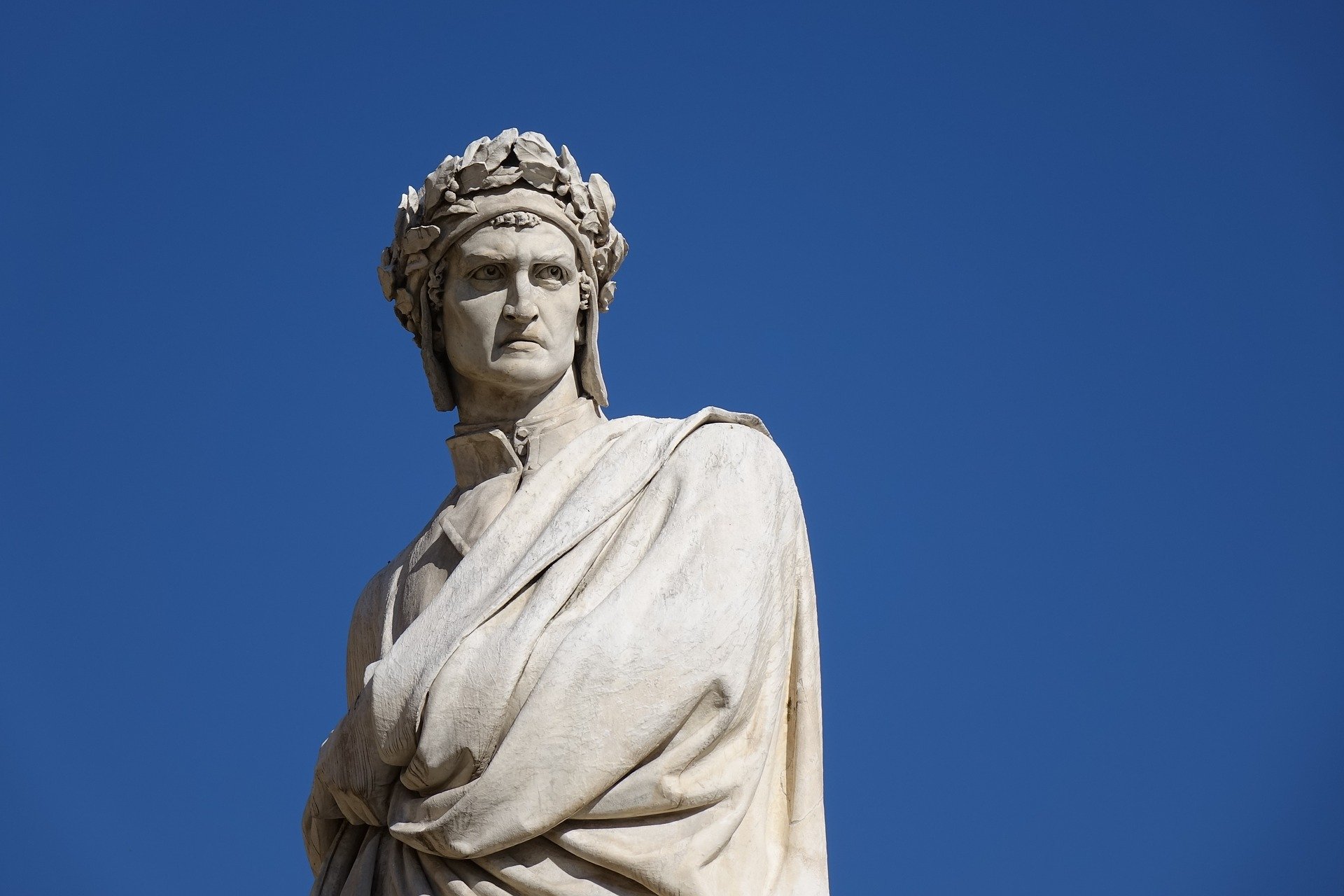 ANNIVERSARIES: SEPTECENARY OF THE DANTESQUE CELEBRATIONS

This year will be dedicated to the death of Dante Alighieri, which occurred in Ravenna, his place of exile, just 700 years ago. There will be many cultural initiatives that will take place throughout Italy, aimed at remembering the Supreme Poet, symbol of our country. The Divine Comedy, withnsidered unor of his most appreciated literary masterpieces thenquatany part of the world, is more relevant than ever today, as it can spread to us the hope of being able to soon "see the stars" in this troubled historical moment ...

Dante Alighieri can be considered the father of the Italian language, it was he who grasped the importance of the vernacular and wrote masterpieces in that particular language. It is thanks to his works such as "The Divine Comedy" e "The De Vulgari Eloquentia" that the Italian language was able to develop and obscure Latin which, until that moment, was considered the main language. Throughout his life Dante was considered one of the greatest literary and cultural exponents of the period. Although he was appreciated for his works, his political ideas led to his exile from his native Florence in 1304 after a harsh clash with Pope Boniface VIII and wandering as a "guest" in the most important Italian courts of the time. The forced exile lasted until his death in September 1321 in Ravenna, where Dante was a guest at the court of Guido da Poletta, podestà of the Romagnola city. Following his death, numerous prominent figures of the time honoured the passing of the Supreme Poet, among them Giovanni Boccaccio was certainly the one who had the most important role. Since the middle of the fourteenth century Boccaccio began to spread the cult of Dante in a capillary way. If Dante's cultural value has survived over the centuries, arriving to be universally recognized all over the world, part of the merit goes to Boccaccio and his followers who actively committed themselves so that he would not be forgotten and his literary masterpieces would not be obscured by his political ideas. Even today Dante is considered a fundamental figure for our nation, demonstrating that the greatness of his work and service to Italian culture has transcended time, immortalizing him forever in the cultural Olympus. On the occasion of the 700th year since Dante's death, undisputed symbol of Italianism but above all of Tuscanness in the world, a rich calendar of unique and unmissable cultural events will celebrate his timeless greatness. Currently, the two days dedicated to the Supreme Poet are: March 25 also called "Dante Tuesday" which, in addition to celebrating since ancient times the Florentine New Year and the Virgin Mary patroness of the city, corresponds to the beginning of the journey of the poet in the afterlife of the Divine Comedy. In the evening, Dante's tercets will be the protagonists of a social initiative realized in collaboration with the Dante Society of America and New York University: it is a "Call to action" that will invite people from all over the world to recite their favorite passages of the Comedy. The event will open with a streaming greeting from Piazza Santa Croce in Florence and from Dante Park in New York. May 14 is the date when in 1865, on the occasion of the 600th anniversary of the poet's birth, the Procession of Flags was held in Florence from Piazza Santo Spirito to Piazza Santa Croce to celebrate the statue of Dante. These are the main events to mark in the agenda aimed at commemorating the Florentine poet, but if the health situation will allow it, the places he mentioned in his tercets will become the fundamental nucleus to continue with the celebrations that, between June and September, will host initiatives of various kinds aimed at rediscovering, enhancing and promoting for cultural purposes but also for tourism the link with the Supreme Poet. And so, in addition to Florence, Verona will also have the honour of telling its visitors about Dante's cultural heritage left in the city of Verona. The heart of the project is entitled "The Verona of Dante"a video journey to discover the places of the poet in the Venetian city, directed with the journalist and writer Francesca Barra and the actor Claudio Santamaria. Between 17 and 22 May the international conference "With another voice now, with another fleece. Dante between ancient and modern"aims to investigate both the historical and cultural context of the poet, and the reception of the work with particular reference to theater and cinema. In Mantua, the city in which Dante had strong ties with Virgil, the exhibition "Dante and the culture of the fourteenth century in Mantua"from March 18 to June 20, while the City of Borgo Virgilio together with the Virgilio Literary Park will propose a series of events from April to September entitled "Virgil and Dante in the waters of Manto"guided tours are planned, along river, cycle and walking paths, through the most evocative places in the Mincio Park. Also in Milan from April 7 to July 15 at the Duomo will be held a reading of the Divine Comedy: "100 Songs in 100 Days", under the artistic direction of Massimiliano Finazzer Flory and with the collaboration of the musicians of the Teatro alla Scala will be staged every day the reading of a song of Dante. Today the reading of the Divine Comedy can only make us reflect on the current condition in times of health emergency. In the last canto of the Inferno Dante and Virgil, after having laboriously crossed the underground tunnel that connects the Inferno to the beach of the Antipurgatory, contemplate the starry sky of the other hemisphere, a sort of omen of the new path of light and hope after the previous darkness. And in fact, Dante tells us that that sky shows itself "as pure happiness of the gaze". In that way, this vision could be associated with the condition of quarantine to which some of us are forced to pass. We all live in expectation of emerging from our own personal hell, just as Dante and Virgil did. All hoping to find ourselves as soon as possible at least in the purgatory of this pandemic and clinging to the one and only hope of returning to normal.

You forgot to enter a video URL.