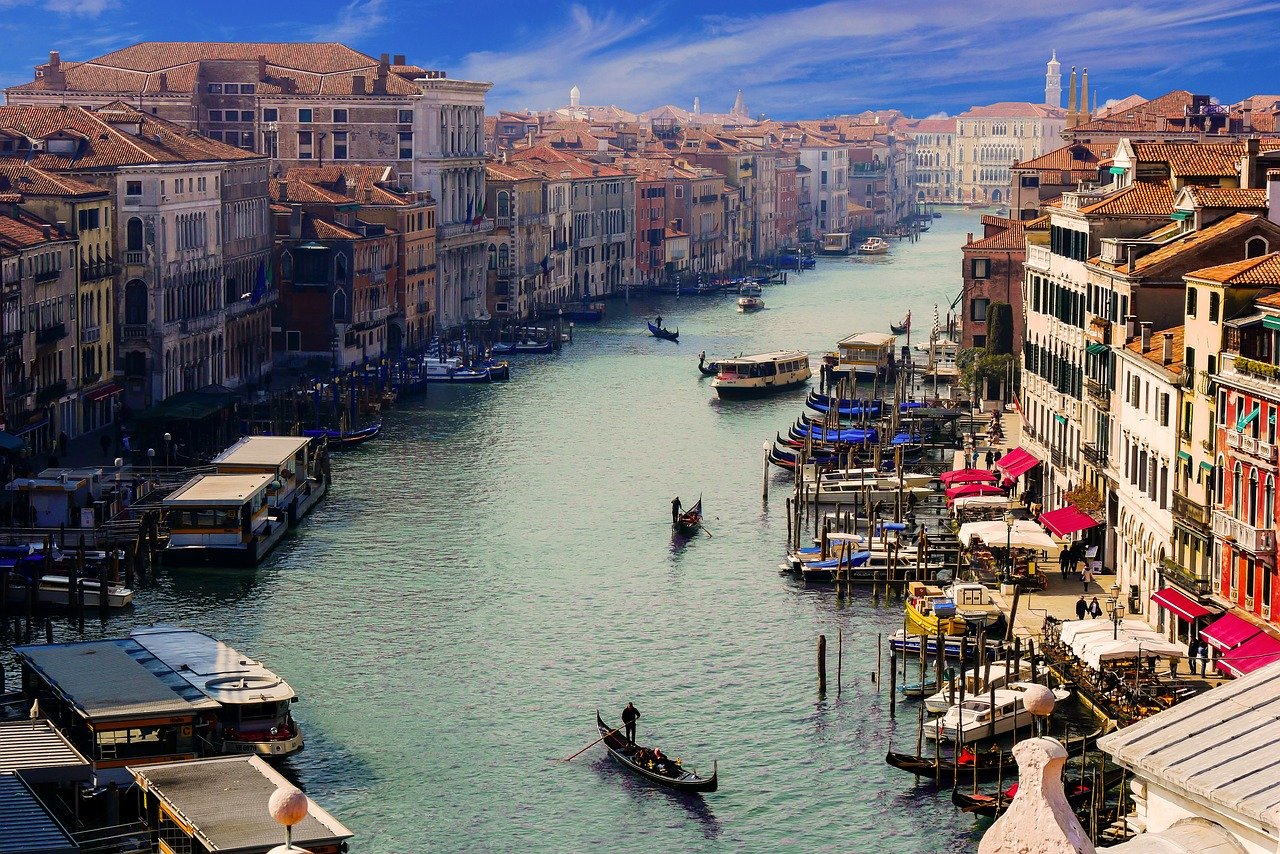 The Grand Canal has always been defined as "the most beautiful street in the world", a very prestigious waterway overlooked by an almost uninterrupted parade of sumptuous palaces, the scene of festivals and executions, the home of important families and the pulsating centre of popular life, not to mention the strong appeal it has aroused over time for artists, poets, writers, musicians, princes and rulers from all over the world. But its charm continues today to conquer the eyes, mind and heart of visitors who will not be disappointed when they walk through this Venetian soul ...

The Venetians call the Grand Canal "Canalazzo", a name that, contrary to what one might think from its derogatory sound, means that it is larger than the other waterways that run through the city. In fact, the Canalazzo is the only canal proper, while all the other waterways are called rii. Since the beginning, the Grand Canal was the real lifeblood and salvation for those Venetian people who, from the mainland, were forced to take refuge in the lagoon islands because of the barbarian invasions that soon led to the decline of the Western Roman Empire. After the first settlements took place on the island of Torcello, new populations began to settle on the islets of Rialto, fleeing from the Franks and creating a first customs government in the lagoon. Its waters were ploughed for centuries by rich merchants and ambassadors, foreign commanders, but also by brave Venetian admirals who, after spending long months if not years outside Venice, seeing the Grand Canal again was synonymous with having returned home. On the shores of the "most beautiful street in the world", as the French ambassador Philippe de Commynes defined it, are reflected the most prestigious city palaces realized by the wise hands of the architects that have followed one another in history and that, still today, are distinguished by their entrance steps from the water, by the terraces that overlook the canal and by the polychrome facades that give more suggestive shades of colours at dawn and at sunset. Navigating along the Grand Canal today you can retrace the many events that took place both on the left bank (De Citra) and on the right bank (De Ultra). A very curious story starts right at the foot of the Scalzi bridge, near the Santa Lucia railway station. This is where Palazzo Soranzo Calbo Crotta is located, the home of a wealthy merchant family from the 1300s. At that time, Giovanni Soranzo was elected doge and to celebrate this important event he had the idea one day to invite Dante Alighieri to lunch. When all the diners sat down to lunch, the Florentine writer observed that the fish served on his plate was smaller than that of the other guests. Dante, therefore, took the fish and brought it close to his ear pretending that he was about to communicate something. The Doge was astonished by his gesture and asked him what he was doing. Dante answered that many years ago his father had died in those seas and he was asking news to the fish. Giovanni Soranzo curiously asked, "Eh cossa el ve dize?" "He says that he is too young to remember anything, but that there are older ones at this table who will certainly be able to give him an answer." At the words uttered by the poet, the doge laughed loudly and ordered the servants to bring a larger fish. Continuing our navigation we approach towards the famous Rialto Bridge. In front of the famous fish market, therefore in the De Citra part, that is on the left, there is one of the most characteristic and secular palaces: Ca' da Mosto, a building of Veneto-Byzantine taste of the XII century. Here was born Alvise da Mosto, one of the most famous Venetian navigators of the 15th century who, under the crown of Portugal, sailed through Senegal and Gambia in order to establish trade and find new sources where to get gold, as Europeans used to buy it from the Africans in the Mediterranean. After leaving the Rialto Bridge behind us, a simple Renaissance-style building draws our attention to its past. It is Ca' Cappello Layard, a palace that at the end of the nineteenth century became the home of the English archaeologist and ambassador Austen Henry Layard, who became famous for his discoveries of the Assyrian city of Nineveh. He enriched his building with an extensive art collection, which his wife donated to the National Gallery in London. Moreover, Layard was one of the founders of a well-known Venetian company that laid the foundations for the revival of glassmaking by recovering ancient techniques and whose prestige saw a sharp decline during the Austrian occupation. We finally reach one of the most beautiful views and photographed by visitors, Punta della Dogana, a thin triangular point overlooking the basin of San Marco. Our gaze immediately focuses on the white tower topped by a golden ball depicting the world supported by two Atlases, but the legend behind Punta della Dogana is nothing short of disconcerting. It is said that in a large cavity under the Dogana dwells a terrible monster similar to an enormous sea serpent. This monster would be seen very rarely and only on moonless nights, when the water in the basin of San Marco is very dark... Hence the name "black water monster". The last sighting dates back to 1933, when two cuttlefishermen swore they saw a seagull come out of the water and devour it in one gulp! Legends and mysteries pervade every single corner of Venice and only those who hold the keys to the city have the power to bring them to life for their guests, making them wonder at the intriguing tales hidden in the lagoon.