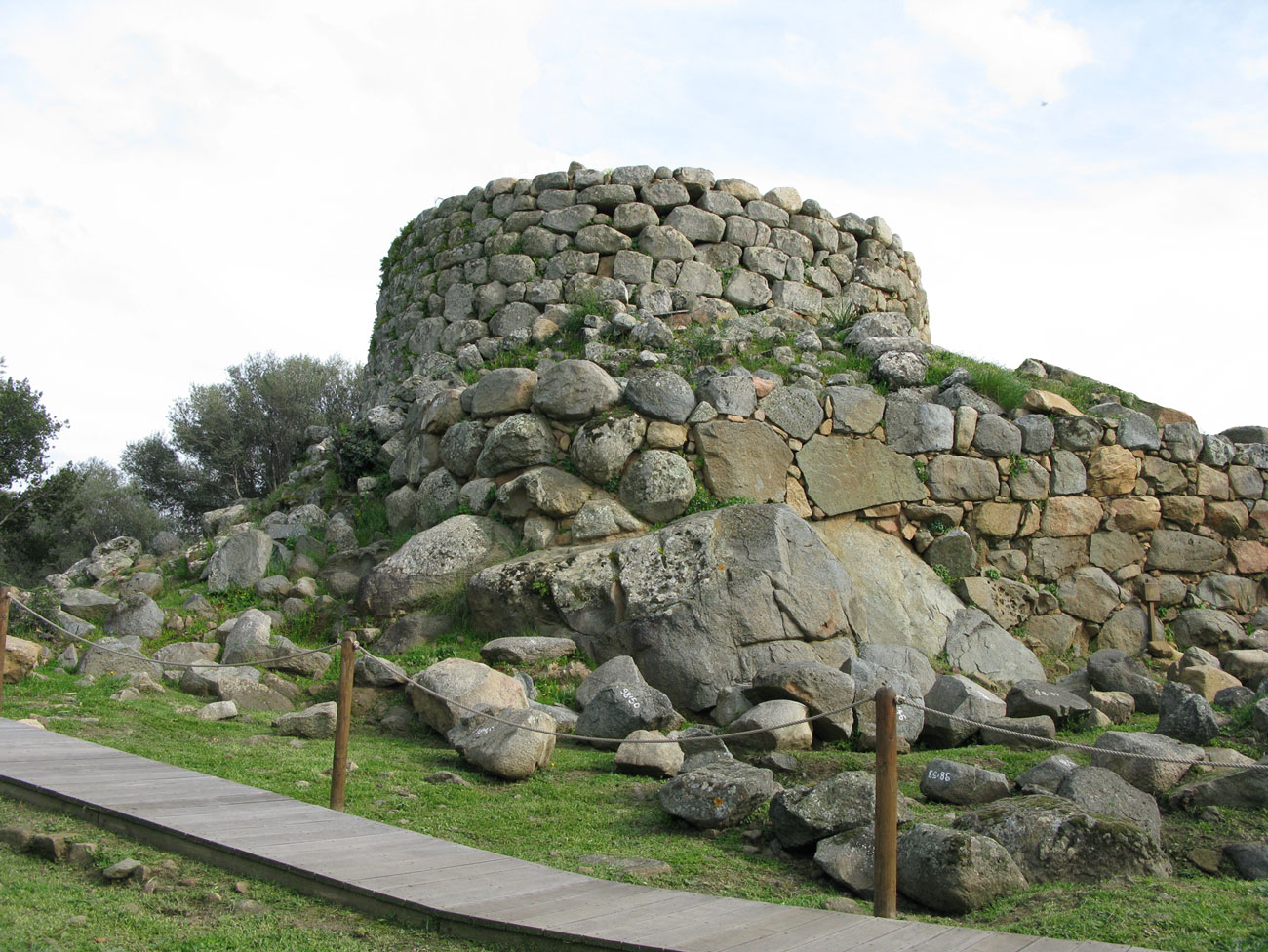 Among the monuments of the territory of Arzachena that deserve particular attention are the nuragic complexes. Consisting of residential buildings, fortresses, places of worship and funerary sites, they offer, as a whole, a very complete picture of the life that must have taken place within these agglomerations. Their dimensions are quite varied: from the large nuraghi to which populous villages of dozens and dozens of huts and numerous burials belonged, there are also complexes of much more modest size, and others composed of small nuraghi, a few huts and a single tomb of giants. In some cases, then, simple single-tower nuraghi, isolated in the countryside or perched on rocky formations, under the collapse or silting up due to natural agents, hide walled structures pertaining to ramparts, huts, places of worship that only the work of the excavator can quantify their real consistency. These complexes were not always born and enlarged at the same time: in some cases it is the nuraghe that was built first, while in other cases it is the village that was built first, and to this nucleus was added the most important building, the nuraghe. It is therefore a matter of agglomerations in which the entire life of populations was consumed, which, if on the one hand could boast a high level of culture, with a wide knowledge of metal, wood and stone handicraft techniques that allowed a flourishing exchange activity, on the other hand, on the basis of what is observed in the excavation of numerous settlements, the standard of living must have been very simple, with an economy based mainly on cattle breeding, agriculture, that is to say, all those occupations that engage a community in the course of a day.

The Nuraghe La Prisgiona, located in the Capichera region of Arzachena (SS), rises to dominate and control a territory of several square kilometres. The dimensions, the complexity of the structure and the architectural expedients that have been used denounce its pre-eminent role within the territorial system to which it belongs. It is, in fact, a complex nuraghe, of the so-called tholos type, i.e. with a false dome roof, rather unusual in Gallura. The monument has a central tower (the keep) and at least two lateral towers incorporated in a bastion. The donjon has an entrance characterized by a gigantic lintel of 3.20 metres. The central chamber is covered by a false dome, is over 6 metres high and has three niches arranged in a cross. The bastion is further protected by a curtain wall that encloses a large courtyard equipped with a well over 7 meters deep and still active today. At the bottom of the well, numerous vascular forms have been found, including several askoid jugs finely decorated and with traces of restoration carried out in ancient times, which testify to their value. In fact, they were not used to collect water, but were intended for special uses. This unusual scenario leaves room for hypotheses and suggestions... What drove the community to abandon them at the bottom of the well? Were they perhaps used during particular rituals? In this vision, the reserved location, a few metres from the well, of a very peculiar circular building is no coincidence: the "meeting hut". Its value as an exclusive place is further confirmed by the discovery of a vase with an unusual shape and decoration, most likely intended for the production of a special drink: a simple decoction or an unusual distillate, whose consumption was intended for a few? Perhaps to the only 16 people who, during the meetings, sat on as many seats arranged in a ring in the hut? Perhaps the heads of the village, or in any case people of rank, gathered in an atmosphere of a mixture of politics, religion and magic. Around the nuraghe there is a village with about ninety huts. In the complex of 15 environments investigated, it was noted their arrangement in blocks between which intersect paved paths. One block, composed of a group of five huts, revealed specific handicraft activities that made it possible to reconstruct an organizational framework of production on a larger scale than that of the family that had been hypothesized until now. The largest portion of the village is still to be excavated, protected and guarded by the earth and the Mediterranean scrub that generously covers the Capichera valley. For now, its intricate roots are the holders of many secrets of a wealthy and dynamic community, organized on the territory and open to transmarine relations. The chronological data collected up to now indicate a life span of the settlement between the 14th century B.C. and the 9th century B.C. The collapses of the nuragic structures, which are now several centuries old, bear witness to a Roman Imperial Age attendance and tell interesting moments of agro-pastoral life. We will have more answers as soon as adequate funding will allow Dr. Angela Antona, archaeologist in charge of the excavation and her multidisciplinary team, to resume work. Attention is drawn to the intricate architectural, political, social and economic evolution of a complex that, in terms of extension and typology, has no equal in the North East of Sardinia.