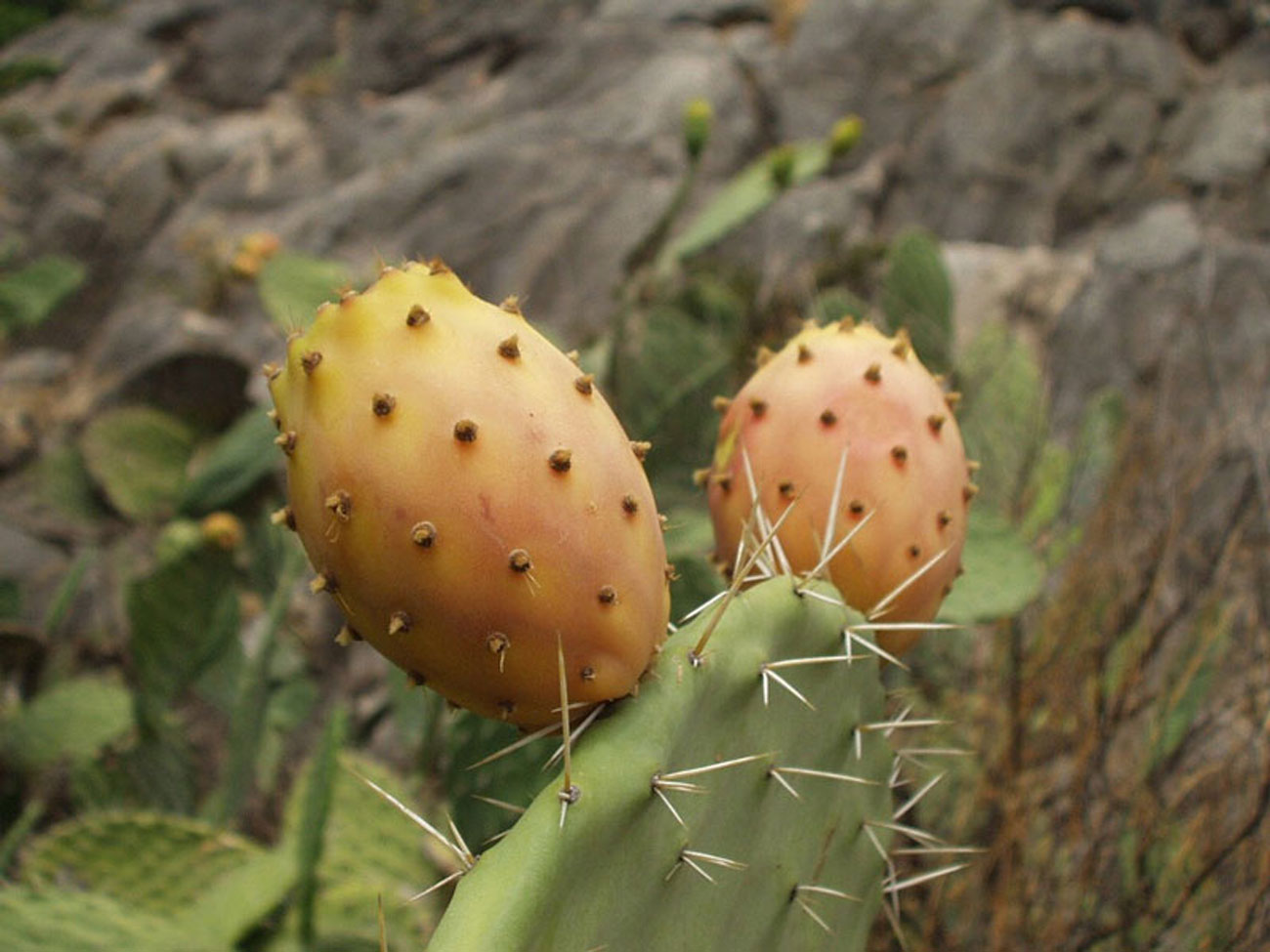 THE FLAVOURS OF AN ISLAND

Sardinia, a land rich in natural beauty and culture, is also home to a culinary tradition that for centuries has attracted palates from all over the world. Who does not know or has never tasted the Sardinian piglet? It is prepared all over Sardinia, from the typical spit grilled or baked with potatoes and a few sprigs of myrtle until the cooking under the ground used in ancient times by Sardinian shepherds "Su Porceddu a Carraxiau" and still used in some areas of the island, the latter very slow cooking, between 3 and 4 hours. In the meantime, a glass of good Cannonau, the most famous Sardinian vine and known all over the world, with a ruby colour and a strong and tannic taste, is a must. Among the most important are the Cannonau of Jerzu and the Nepente of Oliena. Its rival, the "Carignano del Sulcis". The porcetto is then served in a cork tray on a bed of myrtle and "Pane Carasau" or music paper, crunchy and light, long lasting because in ancient times it was carried by shepherds during transhumance. Leaving instead to toast with plenty of extra virgin olive oil and a pinch of salt you get the "Pane Gattiau".

Let's start now our gastronomic itinerary starting from the south of Sardinia, in the Campidano area with the "Malloreddus" alla Campidanese or more commonly known as Sardinian gnocchetti, made with hard grade semolina and rolled on a basket or knurled board. Prepared with sausage ragout and Sardinian pecorino cheese, sometimes with the addition of saffron from San Gavino Monreale and wild fennel. The Sardinian pecorino, just mentioned, is a typical cheese of which this land can be proud, from the sweet one to the most seasoned, to the "Cazu Marzu" (cheese with worms) with a pungent taste. We move to the island of Carloforte with its bluefin tuna tuna tuna fishery, its strategic passage in the Mediterranean, which is known as "corsa tuna", makes it the most valuable and among the best in the world for quality and taste, here is also produced the Bottarga di Tonno. Talking about Bottarga, let's go up to the Oristanese, to Cabras, to discover the yellow gold of Sardinia, the Bottarga di muggine (Mullet/Muggine roe), used all over Sardinia as an appetizer or in seafood first courses such as spaghetti Arselle e Bottarga or with the Sardinian "Frègula", the latter is a pasta in the form of balls of hard wheat left to dry or toasted that can vary from 2 to 6 mm in diameter.

The pond of Cabras and its surroundings favour the preparation of numerous fish dishes, such as "Sa Burrida" di Gattuccio and roast or stewed eel. Not far away, in Bosa, we can sip an excellent Sardinian "Malvasia", with a straw-yellow colour and golden reflections tending towards amber. Still in the Oristano area we have a typical and particular pasta, the "Lorighittas" of Morgongiori, with a twisted shape, typically prepared with free-range cockerel or wild boar meat.

Let's leave the west coast for a moment to move to the true heart of Sardinia, in the Nuoro area between Bargagia and Ogliastra. Here we are spoilt for choice, from the "Maccarones de Busa", typical macaroni made of fresh pasta with an elongated shape and created with the "busa", the underwire that women use to knit, to the classic "Culgurgiones" from Ogliastra, a fresh pasta stuffed with potatoes, Culgurgiones" from Ogliastra, a fresh pasta stuffed with potatoes, pecorino cheese and mint, with a particular ear of wheat closure, or the "Pane Frattau" from Oliano, a traditional dish made with Carasau bread soaked in broth, tomato sauce and pecorino cheese, usually accompanied by a poached egg in the middle. The meat speciality is "Sa Cordeddas" or "Cordula", a weave of lamb intestines and guts roasted or cooked in a pot with peas, or "Pecora in Cappotto", a traditional dish during street festivals whose aroma flows through the streets of the village, made with boiled mutton, onions and potatoes.

Let's go up again, in Gallura, between sea and land there are "Li Chjusoni" or ciusono that unlike Malloreddus are larger and prepared with simple 0 flour, water and a pinch of salt. In the past they were prepared on the 1st of August to celebrate the end of the harvest with game sauce (in the past Pernice). From gnocchi to "Li Puligioni", sweet ravioli made of ricotta cheese with grated lemon rind and a pinch of sugar served with the sauce and then continue with the "Suppa Cuata" or Zuppa Gallurese, born and originating in Arzachena, is a typically poor dish made with stale bread, mutton or sheep's broth, fresh Provola cheese either sliced or grated, seasoned with spices and parsley and cooked in an oven dish. Nowadays the sheep broth is often replaced with beef broth which makes it lighter. It is good to specify that within Gallura there are different variants.

The Gallura tradition brings us to the "Mazza Frissa", prepared with cream obtained from skimming whole milk, flour and put in a pot on the fire. The characteristic is that it remains as soft as a belly even if fried. Also considered a poor food, often the Gallura peasants let it cool and the day after, once hardened, they sliced it and took it as the main meal in the fields always with a jar of honey. Or, you can add some fresh cheese, at the beginning of cooking to prepare "Lu Casciu Furriatu". In spring both the Mazza Frissa and Lu Casciu Furriatu were used to season Li Chjusoni. After a good first course there is always a good second course "La Rivea" or more commonly "Coratella", made with lamb or kid entrails and lard covered with the blood of the animal itself, spit-roasted over hot embers or baked in the oven.

As we draw to a close, we move west into the Sassarese area with the "Zimino", a grilled dish made with lamb and beef offal, or the typical "Monzette Sassaresi" prepared with small fresh local snails, garlic, parsley and extra virgin olive oil (sometimes with sauce).

Alghero, the city of coral and offers its "Catalan style lobster", a dish originally from Catalonia that is offered as an appetizer or as a main course, with tomatoes and onions, a simple dish but rich in taste and elegance. Let's accompany this seafood dish with a good "Vermentino di Sardegna" of Santa Maria la Palma or Sella & Mosca, a close relative of the better known "Vermentino di Gallura", the only DOCG of the island, with an intense and salty taste, with a more full-bodied and alcoholic structure.

Each area of Sardinia has its own tradition and differs especially in sweets, the "Sebadas" or Seadas is the typical Sardinian sweet par excellence, as well as the best known made with semolina, pecorino cheese and honey, then later fried. For the sweet tooth, the "Bianchini" of Fonni or "Sos Marigosos" which are meringues made of eggs, sugar, grated lemon rind and almonds and the "Savoiardi" of Fonni which are soft and frothy biscuits accompanied by a good sweet wine, usually Moscato. During the festive season we have a wide range of sweets such as "Papassini", dry biscuits with almonds and sultanas covered with a white icing, "Li Cucciuleddi e Meli" typical of Gallura with a base of violated dough, honey or Saba (cooked must), "Casciatini" or "Pardulas" or formaggelle prepared with cheese or ricotta and sultanas. Let's conclude with the nougat of Tonara, made with almonds and honey, accompanied by a good digestive, the red or white "Mirto", a liqueur famous all over the world, obtained by macerating the ripe blue berries of the myrtle, an endemic Sardinian shrub. Or a drop of "Filu e Ferru" or vine water, was produced in ancient times clandestinely and then hidden underground with a wire in the ground to remember the position, hence the name. If you want to try a different and particular taste, you can go to Dualchi, where the prickly pear liqueur made with prickly pears macerated in "Filu e Ferru" is produced.

Here ends our journey through Sardinia through its most traditional dishes.