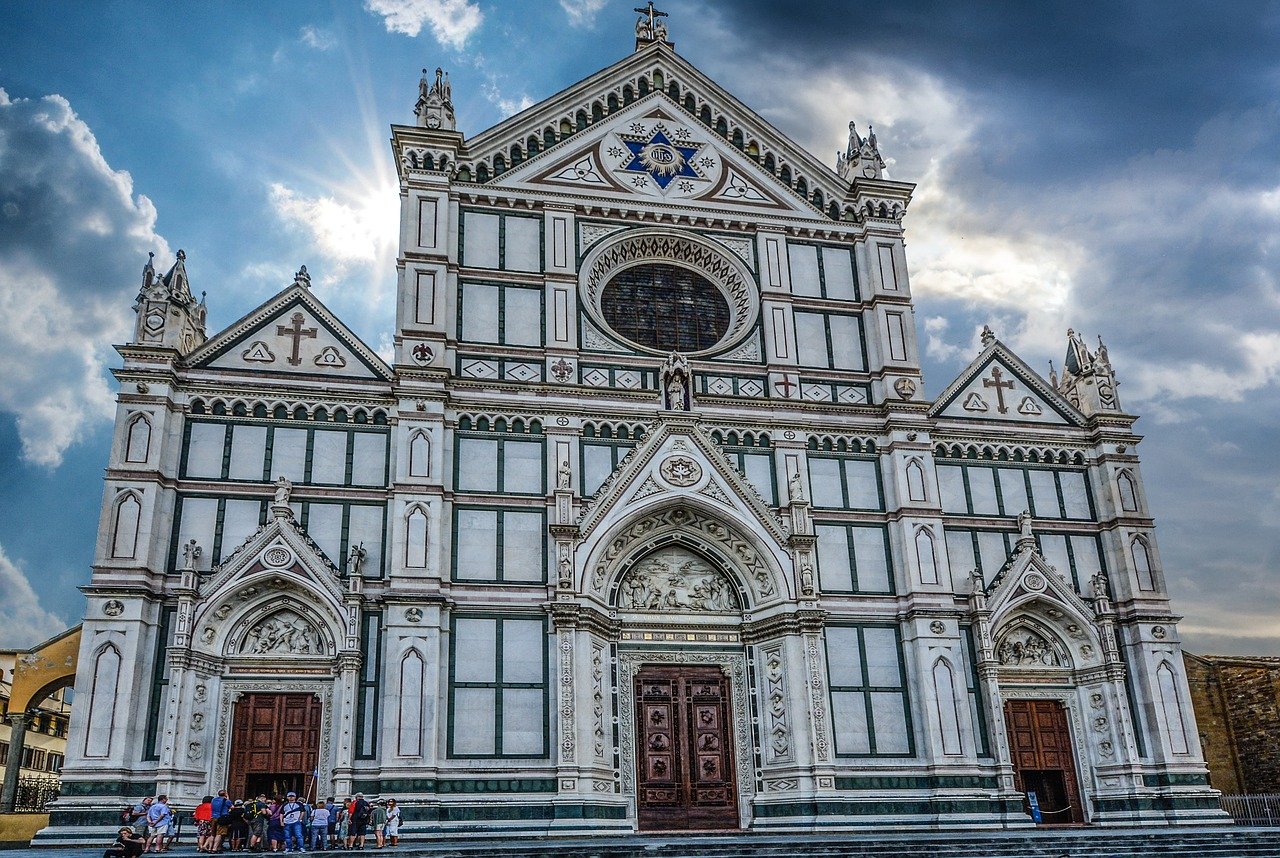 Although the origins of the first Franciscan oratory are still lost in the mists of time, the construction of the new Basilica of Santa Croce is well documented and was officially started on Ma y 3rd 1294, when the architect, Arnolfo di Cambio, laid the first stone of what was to become a masterpiece of Gothic art. His design was based on spatial grandiosity, with the structural elements carried out with rational clarity and sobriety.

It is built on the plan of an Egyptian cross (in the shape of a T), with the interior divided into three naves (114,45 metres), a chancel and a transept full of chapels whose patronage was reserved for the most illustrious families in this quarter of the city: the Bardi and Peruzzi families were the foremost, but there were also the Tosinghi, Pulci, Rinuccini and Alberti families…The walls of these chapels and the entire church turned the basilica into a museum of Florentine Trecento painting. The same artists also designed the wonderful luminous stained-glass windows. When at last the church was finished in 1442, it was consecrated by Pope Eugene IV. The facade was left undecorated, in fact it was not completed until 1857-63, more or less at the same time as the Belltower was rebuilt to replace the original one which had been struck by lightning. New architectural additions were introduced thanks to the patronage of Cosimo “the Elder” de’ Medici and Andrea de’Pazzi. The former had the Chapel of the Novitiate built next to the Sacristy in 1434-45 by Michelozzo and decorated by Andrea della Robbia and Mino da Fiesole; the latter sponsored the Pazzi Chapel, in the first cloister or Cloister of the Dead, designed by Filippo Brunelleschi and started in around 1430. Brunelleschi also designed the second Cloister of the Convent, or Greater Cloister, continued after his death by Bernardo Rossellino (1453 circa) with a fine entrance door (1450 circa) by Benedetto da Maiano. The Basilica also contains numerous examples of typically Renaissance sculpture. The most famous of these is the Crucifix by Donatello (1425, Bardi Chapel in the left transept) and his aristocratic Annunciation in grey stone with gilded highlights (1430-35), recently restored by the Opificio delle Pietre Dure. Nor should we forget the Pulpit by Benedetto da Maiano (1472-80) or the Madonna of Milk by Antonio Rossellino (1478), placed above the tomb of Francesco Nori, prior of the Republic and who died saving Lorenzo the Magnificent’s life at the time of the “Pazzi Conspiracy”. Lastly, the two funeral monuments by Bernardo Rossellino (1444-1451) and Desiderio da Settignano (1455-64). The former, dedicated to Leonardo Bruni (1369-1444), humanist and Chancellor of the Republic, is considered a prototype among Renaissance tomb monuments. The presence of a great many funeral monuments and tombstones (276 can still be seen on the floor alone) has led to the Basilica being thought of as the city Pantheon, the burial place of Florence’s most illustrious citizens. Somewhere here lie the tombs of Taddeo Gaddi and Count Ugolino della Gherardesca. Other famous inmates include Michelangelo (tomb by Vasari, 1570), Galileo Galilei (tomb by Foggini, 1737), Vittorio Alfieri (tomb by Canova, 1810). Unfortunately, the monument to Dante, whose remains repose at Ravenna, is only a cenotaph (S. Ricci, 1829). The poet Ugo Foscolo described the church and its Tombs of the famous in his “Sepolcri”. Other tombs can be found in the first cloister, beneath the loggia attached to the church (the oldest), and in an underground corridor. The latter form a complete range of Neoclassical and Romantic sculpture. The Cloister, which also contains the entrance to the Museum, can be reached directly from the square.