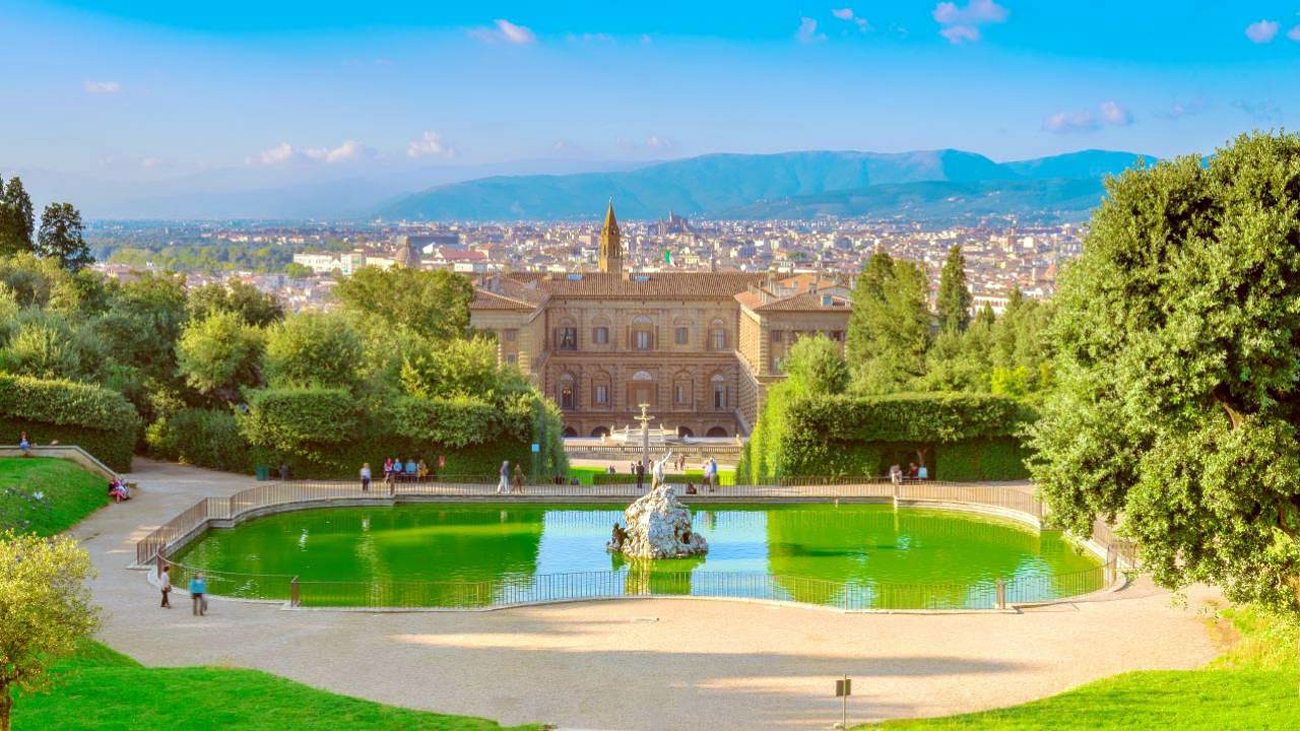 We enter the magnificent Boboli gardens from the great square dominated by the Pitti Palace, royal palace and home of all the reigning dynasties. The Medicis resided here, followed by the Lorraines and lastly the Savoy family, who lived in the palace when Florence was temporarily the Capital of Italy.

It not only contains the Monumental Apartments but also boasts six other museum collections. The magnificent Boboli Gardens lie behind the Palace, with Fort Belvedere, dedicated to St. George, at the top of the hill. A stroll around the Boboli Gardens, especially on a sunny day, make a very pleasant change between museums. The name of the Boboli hill probably derives from the “Borgoli” or “Borgolini” family, who owned houses and land in this part of the Oltrarno beside the Church of Santa Felicita. Luca di Bonaccorso Pitti however bought the area and the farm that stood here in 1418 from the De’ Rossi family in 1418 and then commissioned Filippo Brunelleschi to build the palace. The spectacular gardens cover 320.000 square metres of land and are full of rare plants, grottos, fountains and statues laid out along the slopes of the hill. The design of the gardens, carried out by architect and sculptor Niccol. Pericoli, known as Il Tribolo, was used as a basis for all the royal gardens in Europe, including Versailles. This artist had already shown his worth by carrying out the gardens of the Medici Villas of Castello and La Petraia, where he also proved to be a master of hydraulics, creating magical fountains and plays of water. Il Tribolo created his masterpiece of “landscape gardening” at Boboli between 1550 and 1558, the year in which he died. The garden of the late Renaissance transformed the small and intimate garden of the Middle Ages into a symbol of princely power. It became a theatre for festivities and performances, somewhere for the Court to relax, while providing an allegorical itinerary through woods populated with statues, grottoes and fountains, many of them Mannerist inventions by Buontalenti. Typical examples are the Grotta Grande or Large Grotto, the splendid fountains and statues, among them the Fountain of Neptune or The Abundance (Joan of Austria, Cosimo I’s first wife was the original subject for this statue), by Ammannati, Giambologna and Tacca, and the recently restored Gladiator, a 17th century restoration of a Roman copy of Aristogitone, which was brought to Florence from Villa Medici in 1616. The authors of the restoration of Aristogitone have been identified as being two brothers Domenico (1600-1656) and Giovan Battista Pieratti (1599-1662), Florentine sculptors, who worked in the Boboli Gardens for the Medici Court during the first half of the 17th century. The two architects Giulio and Alfonso Parigi, father and son, carried out the stone Amphitheatre in the 17th century, the unique setting for many celebrated theatrical performances, the cypress alley known as the “Viottolone” and the square and the large square containing the pond of Isolotto, with Giambologna’s Fountain of the Ocean. The last additions, built in 18th century, like the Coffee house (1774-76, today restored and functioning as a bar for visitors to the gardens, who can admire a unique view of the city from its tables), the Lawn of Columns (1776) and the Lemon House (1785), were installed by the Lorriane family who, in the 19th century, transformed some areas in the grounds into an ‘English garden’, according to the latest romantic trends then in vogue. Pietro Leopoldo decided to open the garden to the public in 1776. The Giardino del Cavaliere, or Garden of the Knight, a solitary and private area in the grounds, can be found at the top of the hill, close to Fort Belvedere, hiding the small palace that today houses the Porcelain Museum. Visiting the Boboli Gardens is an real discovery, in fact we could almost divide a tour of these gardens into a series of itineraries, each concentrating on one of its particular aspects (botanical, historical and artistic), with others linked to the history of landscape gardening.